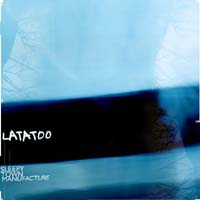 It's a pleasure to be able to put out the second Monotonik release from the Russian duo, Sleepy Town Manufacture (who are newly expanded to three with the addition of a new German-based Russian member.)

They ended up tapping their friends, both 'famous' and up-and-coming, to remix their dreamily ambient 'Latatoo' track, which is featured on the forthcoming "Cottage Industries 3" compilation on the ever excellent Neo-Ouija.

And, as the icing on the cake, Sleepy Town have complemented the original track with two original re-interpretations of it by themselves, to put the finishing touches to this perfectly chilled 7-track mini-album. Horizontality is our new mentality, thanks to STM.

To run through the tracks quickly, the original of "Latatoo" is a spectacularly ambient angel-song, with the guest vocals from Anna Yuhanova almost subliminally mixed in - sublime.

Then comes the first remix section, from some of STM's rising-star friends, with France's up and coming Tao (from net.labels like Ogredung and Camomille) retooling the track into his more uptempo but still chilled, xylophone and squelch-bass infused 'Calm Mix'. Next up, it's fellow Russian Lost_Bit (net.labels such as Enough Records), whose 'Tatart Mix2' is curiously orchestral, with almost subliminal pops and scratches and a celestial string section oozing serene ambience over the top.

And, with the immaculately programmed 'K.A.B.Y.N' courtesy of Sleepy Town themselves, with guest Alex Kozmidi on guitar and pin-sharp percussion underpinned by improvisation-heavy, gorgeous lead meanderings, we get to the second part of the remixes, from artists already known to those of you who patronise Monotonik regularly.

Firstly, the Australian wunderkind Sense (Neo-Ouija, Aural Industries) imbues his remix with a gradually rising, swelling ambient tone which peaks near the end of the track with a triumphant introduction of shuffling beats - gorgeous stuff. And secondly, Dutch idmtist Secede (Merck) gives us his 'Another Day Wasted Mix', which is a real grower - listen to it over and over and you'll see what we mean.

With the final ambient lead-out of Sleepy Town's own "Latterly" interpretation, we reach the end of the mini-album, and, if you're sensible like us, set it immediately to repeat. We've already dozed off into sublime semi-consciousness once whilst listening to "Latatoo EP" - how many times can you manage it? :)

Oh, and finally, there may be additional remixes posted on Sleepy Town's site in the next few weeks, but Lackluster's great remix of "Latatoo" is one you won't be seeing anywhere, except.. the forthcoming Monotonik mix CD? You heard it here first, more details to follow soon.